Night Street by Barbara Luck is unique in its structure and in the way it makes the reader interact with its pages. Twentysix Gasoline Stations by Ed Ruscha is plain in its structure, but makes the reader reconsider artistic expression through the simplistic photos. Both books tell the story of a physical journey but do it in different yet effective methods – Luck’s through tactile elements and Rushcha’s through portraits of gas stations. 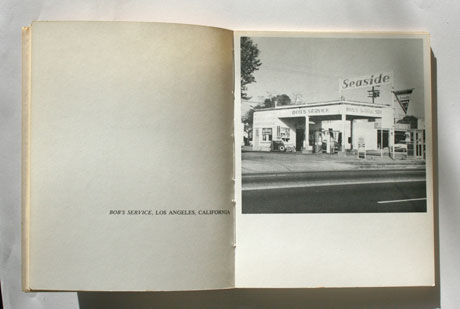 Night Street is bound by interacting streets and tabs of different colored papers. This creates an engaging 3-D form that invites the reader into its accordion and open style. The progression through the book is echoed by the arrangement of the prose –the different angles of text mimic the geometry of actual streets and force the reader to take a walker’s point of view. The typography is small and subdued by the context on some of the pages. Having the printed text be small and angled I the plane of the street on the page makes the text seem like signs conveying a message instead of poems to be read. Luck uses black and white images throughout the book but highlights them with added color drawn on and in paper. This highlighting via color blocks and shadowing immediately shows the reader what is important in the street setting.  Luck takes an ordinary idea – book with poetry and images – and altered the structure of the book which creates a tactile progression of the journey for the reader.

(Page from Night Street shows the text integrated into the visual plane of the image.)

Unlike Luck, Ruscha’s black and white images stand alone on the page but he does alter a single element like Luck. Ruscha wanted his book to be widespread so instead of altering the structure of the book, which would have made it harder and more expensive to produce, Ruscha alters the importance of a typical building specially gas station buildings throughout his trip. Ruscha photographed the stations similar to how a young child would capture their journey. He took normal photos of unnoticed buildings that are ignored in our vision yet revelant and crucial to our modern lifestyles. His style of photography and the book form make Twentysix Gasoline Stations seem like a series of landmark postcards picked up at the stations. But instead of purchasing a card to remember the town his photo of the station not only shows key parts of American culture (the automobile and driving) but also on a literal level he acknowledge the individual stops that make it possible for him to have a trip – almost like a list of donors in a playbill. Ruscha captures landmarks of different significance and does so by not caring about the artistic beauty of the photos but makes them seem novice and causal thus highlighting the iconic presence of these regular daily buildings. His statements use the regularity and simplicity of our lives to question art. This image from Twentysix Gasoline Stations shows the postcard-like resemblance.  (from http://en.wikipedia.org/wiki/Twentysix_Gasoline_Stations)

Although, the two books are different they are also alike. Both play with one element of the book, using simplicity whether in the idea or the format to provide different audiences with their account of a journey.