The chair, while now a seemingly mundane household object, was once a pivotal player in the theatre of home life for the eighteenth-century French elite, and a key component to the “social power of furniture” (Koda and Bolton 20). To understand its interesting role in both the social and decorative spheres, we must first understand that comfort, and using furniture for comfort, as opposed to sheer practicality, were new concepts in the late seventeenth-century and early eighteenth-century, ushered in with the rising popularity of private spaces. No longer were chairs strictly ceremonial – they became luxury objects, and the facilitators for a century of relaxation and intimacy.

Fig. 2: Engraving of chair assembly, from the Encyclopédie

As with any luxury object of eighteenth-century France, the craftsmanship of a chair was truly impressive (see Fig. 2, from the Encyclopédie). Though there were many different types of chairs, the basic process for their creation remained the same. Crafted primarily in a menuiserie (the workshop of a furniture maker, the menuisier en meubles) but worked on by many artisans, chairs were almost always created from a base of walnut or beech wood, with the very rare exceptions of oak or mahogany.

The wood was bent and carved into the correct shape for a chair frame, and then more intricate designs were carved in as well. Elaborate or complex embellishments required the hand of a special sculptor. The menuisier would wax or polish the chair, but chairs weren’t often left that way: yet another artist would gild or paint the frame (see Fig. 3). Finally, the tapissier (an upholsterer) would cover the seat or the whole piece with luxurious fabric. Depending on the type of chair, the liberally stuffed seat, back, or arms might be covered with silk damask, velvet or moquette, painted or printed cotton, or toile (see Fig. 4). Often, this fabric was richly embroidered (for more information, see the article Embroidery in “Luxury Objects in the Age of Marie Antoinette”). The completed chair,

if not created on commission, would then be sold in the upholsterer’s shop. Chairs were frequently a part of larger room sets that included several objects (perhaps more chairs, a stool or two, and a bedcover) of the same fabric.

Chairs helped dictate the movements and social interactions of elites in the eighteenth century, but it is the movability of the chair itself that allowed this. Prior to the evolution of the über-plush personal chair, ceremonial chairs were huge and heavy. Even during the eighteenth century, in very formal spaces, chairs were still large and unmovable. They lined the walls of grand rooms and did not see much use. However, in intimate spaces and with the advent of smaller chairs, suddenly, sitters were moving their furniture to suit their own comfort and the social setting.

Fig. 6), and La Petite Toilette (see Fig. 7). In each of these prints, the chair is a prominent element, though in very different ways. L’accord Parfait shows a harp lesson with a female pupil, seated, while her teacher stands behind her and another man sits in a high-backed armchair to the side. This print shows the seductive power of eighteenth-century seating with the relationship between the standing man and woman, but also demonstrates the use of the back of the chair as a rest, which was quite common – standing guests would drape themselves over the backs or arms of chairs in order to converse with sitters. Le Souper Fin depicts a late-night supper. The high-backed, armless chairs of the diners, two 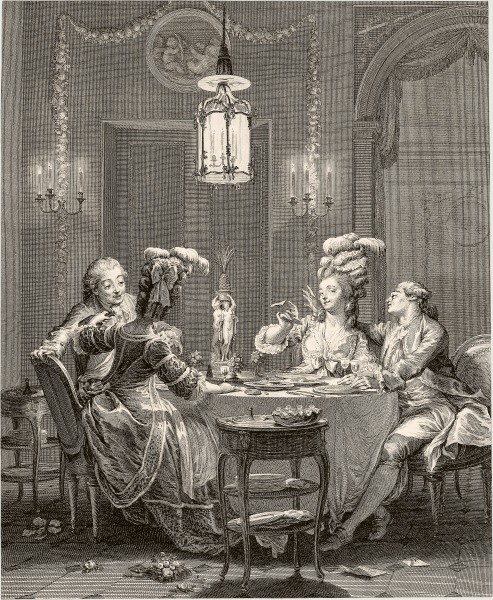 men and two women, are pulled tightly around the table, enabling a certain closeness between them. With the ease of movement that smaller chairs afforded, private social settings became much more intimate; it was easy to pull chairs close

and have a conversation while lounging together (see also: Fig. 1).  La Petite Toilette shows a man in a low-backed armchair being readied for the day. In the ritual of the toilette, a nobleman or woman received visitors of all kinds, and seating played a pivotal role not only in comfort, here, but in displaying rank: only those of a very high stature would be offered a seat.

Not only was the chair a beautiful and luxurious addition to the eighteenth-century home, but its myriad types and uses also enabled the upper class to develop a new kind of intimacy that has stayed with us for centuries.